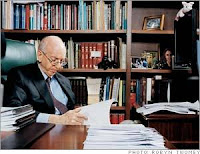 I met Judge Richard Posner when I was in law school. I was chairing a moot court competition at the University of Illinois, and we somehow convinced RP to serve on a distinguished panel for our 2L contestants. What struck about him then is that he is a lot more normal in person than you would expect.
Judge Posner writes faster than I can read. His books touch on diverse subjects such as economics, plagiarism, and sex. His legal opinions are among the most influential of any jurist living today. He hasn't written a whole lot about non-competes or trade secrets, but he doesn't have to in order to earn a bi-weekly slot here. Something can be gleaned from each of his opinions which may be relevant to a non-compete attorney. That is what I am attempting to deliver here.
The first installment of The Weekly Posner comes from a recent Seventh Circuit opinion called ATA Airlines, Inc. v. Federal Express Corporation. The court overturned a jury verdict of over $65,000,000 in favor of ATA in a contract dispute with Fed-Ex. The particulars of the dispute are interesting strictly from a contract formation perspective. The more enduring part of the opinion however is Judge Posner's castigation of ATA's damages analysis.
The court blistered ATA's counsel for not understanding linear regression analysis, which was used by an expert witness to come up with a statistical model of damages. Regression analysis is a modeling technique which explores a causal relationship between dependent and independent variables. It is really complicated stuff, and even my one semester of Statistics at Ohio State would not be nearly enough for me to understand it without an intensive refresher course.
Judge Posner understands it, though. And when he went up against ATA's lawyer, bad things happened. In the Seventh Circuit opinion, Judge Posner noted the failure of the ATA attorney to explain in plain English just what the expert's evidence actually meant. The last paragraph of the opinion says it all: "If a party's lawyer cannot understand the testimony of the party's own expert, the testimony should be withheld from the jury." The Seventh Circuit reversed a $65 million judgment and directed the district court to dismiss the case with prejudice.
For years, the Seventh Circuit - Judge Posner in particular - has been crucifying parties who show up with junk science theories of damages. I have such a case which is in the Seventh Circuit right now, where my opponent had not one clue what its alleged "damages" were. The lesson here is clear: if you are a plaintiff in a business case, you better think through your damages theory from every conceivable angle. If you don't, you're liable to end up with one of Judge Posner's opinions breathing down your neck.
Posted by Kenneth J. Vanko at 8:00 PM