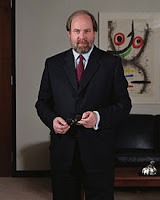 A couple of weeks ago, I read "Making Your Case" by Justice Antonin Scalia and Bryan Garner, the latter being sort of the Steve Jobs of the legal writing industry.

On page 62, the authors discuss brief writing and quote Judge Frank Easterbrook (right) of the Seventh Circuit, who says:

"The best way to become a good legal writer is to spend more time reading good prose. And legal writing ain't that! So read good prose. And then when you come back and start writing legal documents, see if you can write your document like a good article in The Atlantic, addressing a generalist audience. That's how you do it: get your nose out of the lawbooks and go read some more." (Incidentally, Judge Easterbrook's brother, Gregg, is a well-known writer on a variety of subjects (including football) who was published in the February edition of The Atlantic.)

Awesome advice. With some exceptions, the legal writing I see is poorly framed, drab, and mind-numbing.

So I start today's reading list suggesting a great non-legal article. In the February edition of Harper's, Barry C. Lynn writes about the impact of "new monopolies" on free competition. In "Killing the Competition", Lynn discusses the much-ballyhooed pact among the Silicon Valley tech companies not to hire each other's employees.

Interesting news item here in Velo News describing a trade secret/employment contract dispute between Specialized and Volagi. Employees of well-known road bike manufacturer Specialized left to start their own firm, and Specialized claimed that they not only stole trade secret information but also used their former employer's time and resources to start a competing enterprise. Though Specialized prevailed on one claim (and received $1 in damages), Volagi claimed victory and noted the more than $1m in legal fees spent by Specialized. The article highlights the difficulty of proving damages in competition disputes and further illustrates the high legal fees associated with contested litigation in this area.

Finally, Michael Elkon from Fisher & Phillips discusses the use of non-compete agreements in college football contracts. The article points out some very astute policy implications. I wrote on this topic in December 2010 when Bobby Petrino inked his new deal at the University of Arkansas.
Posted by Kenneth J. Vanko at 8:59 AM