The "Inevitable Disclosure" Non-Compete Clause: What is it and for God's sakes...why?

Leave it to lawyers to see an obscure, narrow, and disfavored legal theory and then try to drive a mack f**king truck through it like it's the next great revelation.

To what might I refer? Try a non-compete on steroids, one so hopelessly inane and stupid that, at first blush, it actually has some appeal. Until, of course, you analyze it and put more than three minutes of thought into what you're doing.

I refer to this unicorn (in the eyes of some) as the inevitable-disclosure non-compete, the intersection of obscurity and protectionism. Allow me to explain how this bad-ass of contractual clauses works (until it's declared invalid).

Start with the basics.

An agreement may have several different types of post-employment covenants that bind the employee. You have your standard non-disclosure clause, which limits for a period of time the use of confidential information the employee learned. Then you have your non-solicitation covenant, which may preclude work with a group of valuable clients or recruitment of co-workers.

Hard stop for a second.

Those two types of covenants have some legitimate uses. But lawyers must still draft them reasonably and with sensible scope and time limits, even if a geographical one isn't needed.

Your agreement may even have a general, market-based non-compete that bars work in a relevant industry.

This type of covenant needs to be even more carefully tailored, given its broad economic hardship on the person agreeing to the covenant. It limits work, not a type of work or a narrow subset of work activity. Here, we need activity limits, probably a shorter duration, and in many (but not all) cases a geographic scope confined to the employee's or company's sphere of influence.

An inevitable-disclosure non-compete is profoundly different. It requires the employee to refrain from accepting employment that may require him to use, disclose, or rely on the employer's confidential information. This precise type of covenant recently was held unenforceable in the case of Sullivan v. Gupta, M.D., LLC, No. 2:17-cv-609 (E.D. La. Aug. 10, 2017), because it failed to comply with the requirements in Louisiana for enforceable restraints of trade. (Among other things, State law requires an identification of which parish the non-compete applies to, and this one didn't cut the proverbial mustard.)

This is by no means the first case to find that a stealth non-disclosure agreement constitutes a non-compete.

I have my own experience with agreements like this, and it hasn't been positive (except for the fact that we've won). I blogged a few weeks ago about our trial and appellate victory in Automated Industrial Machinery, Inc. v. Christofilis, 2017 IL App (2d) 160301-U, where the Second District affirmed a fee award for my client, the defendant, of nearly $1.5 million.

One of the issues in that case concerned a non-compete, which the trial court found invalid for lack of consideration. The Appellate Court affirmed that ruling. But it didn't discuss the terms of AIM's non-compete. Had we not prevailed on the consideration issue, we had a strong argument on invalidity (not to mention lack of breach, for which there was no evidence).

That agreement was a true inevitable-disclosure non-compete, and I reprint below the operative restriction, which is stunning in scope: 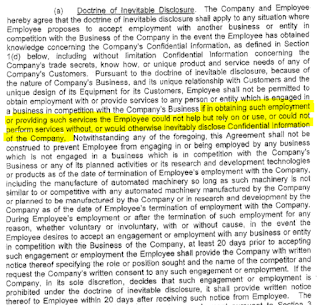 Pretty rough start when you call your non-compete clause a "doctrine of inevitable disclosure." Who the hell thought of that one? Way to be pedantic, and nice way to warm up to a judge.

Beyond that titular snafu, look at the terms. Just two low-lights to point out:

(1) It applies in perpetuity if my client "could not help but rely on or use...or would otherwise inevitably disclose Confidential Information." Who makes that call? How is that agreement one containing definite terms, a plain requirement under contract law?

(2) The employee must provide the company with, basically, a job description and then beg for permission to take it. And the company has 20 days to decide whether "such ...employment is prohibited under the doctrine of inevitable disclosure."

So a clause like this, patently unenforceable and overbroad, vests the employer with sole discretion in perpetuity to decide whether a particular position would require the employee to use its confidential information.

This violates every conceivable principle of non-compete law. No certainty at all. Vast amounts of discretion reserved to the employer to veto an employee's career choice. No time limit to speak of (beyond what the employer itself decides is appropriate). Economic protectionism, to be sure, is not a legitimate business interest.

Bottom line: You use an agreement like this, you deserve to lose. And you will.
Posted by Kenneth J. Vanko at 3:46 PM