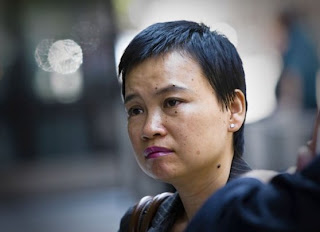 Today's Chicago Tribune Business section contains a lead article on the sentencing of Hanjuan Jin (right), the former software engineer who was caught boarding a plane to China with highly confidential documents misappropriated from Motorola. This is a very in-depth article and also discusses the recent Valspar case on which I have previously written.

The Colorado Springs Gazette discusses a jury verdict of $1.34 million against two former managers who violated non-competition covenants. The article seems to indicate the employees solicited customers, but does not elaborate on the basis for the high damages award. Though damages are difficult to prove in non-compete cases, a plaintiff can recover them with a sound, cohesive theory and well-prepared damages witnesses. Presumably, the plaintiff had that here.

Finally, John Marsh has outlined a series of "7 Deadly Sins" that departing employees should always keep in mind when trying to avoid litigation. His post contains an excellent, in-depth summary of what often causes non-compete/trade secrets suits to go south from the employee's perspective.
Posted by Kenneth J. Vanko at 3:55 PM