End of the Week Discussion

I thought I'd take after Russell Beck and John Marsh and provide a longer summary of some cases, articles, and blog posts I read the past week or so. 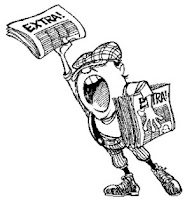 Mind you, a lot of this information gathering occurred at 3 a.m. holding a screaming baby, so if what I write doesn't make sense, forgive me.

United Rentals, Inc. v. Frey, 2012 U.S. Dist. LEXIS 40009 (D. Conn. Mar. 23, 2012). A district court granted an employee's motion for summary judgment on the issue of damages. The case followed a familiar pattern, as the employee violated the non-compete provision by contacting customers within the Restricted Area (as defined in the contract). However, the agreement tried to establish damages by placing a constructive trust on whatever the employee earned as a result of the breach. This was contrary to Connecticut law, which mandates that an employer demonstrate what it would have earned absent the breach.

Fail-Safe, LLC v. A.O. Smith Corp., No. 11-1354 (7th Cir. Mar. 29, 2012). The Seventh Circuit affirmed entry of summary judgment on a trade secrets case, one of the few it has had recently. The case involved an effort between two companies to develop a certain type of technology relating to pool drain entrapment prevention technology (which is a long way of describing way to keep people from getting stuck in a pool...). The case describes the failure of the plaintiff to take any steps to protect what it believed was confidential business information in its technology development discussions with the defendant. Of particular importance to the Seventh Circuit was the lack of any confidential relationship between the two companies (they weren't fiduciaries, partners, or anything really...except two independent entities), the failure to designate or mark documents confidential, and the apparent willingness to disclose information without a confidentiality agreement in place. This wasn't a close case.

United Factory Furniture Corp. v. Alterwitz, 2012 U.S. Dist. LEXIS 48795 (D. Nev. Apr. 6, 2012). This case approved of a mirror imaging protocol over the defendants' computers. The case, which does not deal with a non-compete agreement, generally involved an employee's alleged misuse of company information and improper access to a server. The court balanced the interests in preserving potentially relevant evidence and individual privacy considerations, concluding that the appointment of a third-party neutral expert to image and collect hard-drives was the appropriate way to satisfy the competing interests at stake.

I provided a couple of links yesterday to the U.S. v. Nosal commentary, one from John Marsh and another from Robert Milligan at Seyfarth.

For other commentary on this case, see a Reuters article here. Also the Privacy and Security Law Blog, here.

Hat-tip to Rob Radcliff for his link to this article concerning Synthes' continued pursuit of ex-sales reps for non-compete violations. The sales rep is fighting back with an interesting anti-trust counterclaim, arguing (I think) that Sythes is misusing the legal process to restrain trade.

Really good discussion from Fisher & Phillips on the blue-pencil rule. I happen to think an overuse of the blue-pencil rule smacks of judicial activism, forcing parties to agree ex post to contracts other than the ones they've signed. Vice-Chancellor Travis Laster issued an excellent decision last year concerning this, expressing his rather dim view of judicial modification of non-competes.

Speaking of judicial activism, the Chicago Tribune editorial page published an Op-Ed by Geoffrey Stone on judicial activism, specifically with reference to the Affordable Care Act. This has nothing to do with non-competes, of course, and I'm not sure there is a single thing I agree with in this editorial. Still, it's interesting - in the same way listening to Newt Gingrich can be interesting.
Posted by Kenneth J. Vanko at 10:01 AM